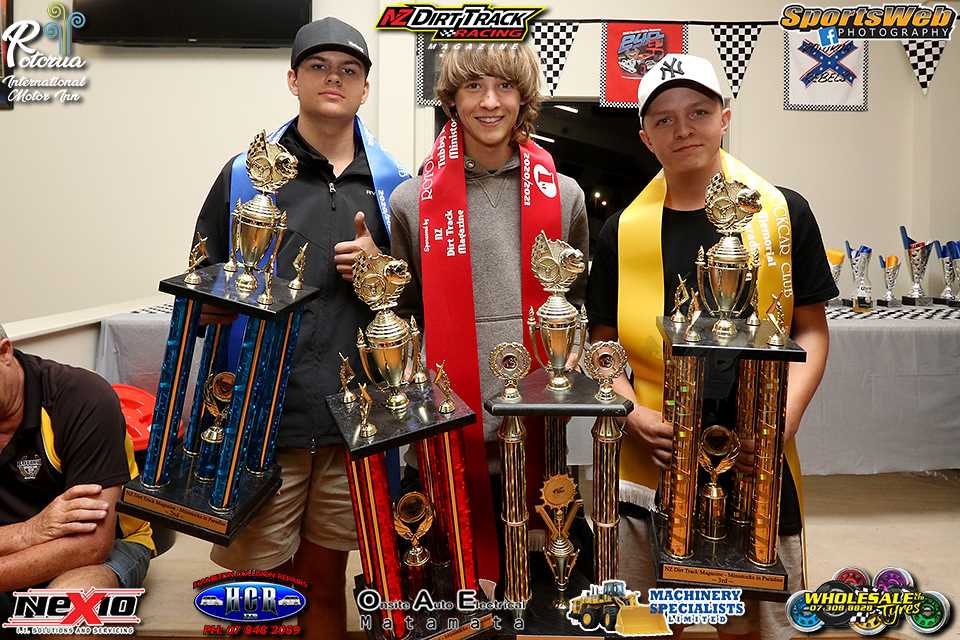 The 2021 version of the New Zealand Dirt Track Racing Magazine Tubby Norris Memorial Ministocks In Paradise at TWS Paradise Valley Speedway concluded on Saturday night. New champions were crowned in both the junior and senior divisionswith some unusually rough racing and delays getting cars back into the correct race order making it a long night which saw many of the young drivers stay up until well past their bedtimes to complete races.

Heat one for the main event got off to a tidy start then crashes started happening which a few out on the infield. At the finish it was the local trio of 212r Terence Dorrell, 95r Mitch Fabish and 93r Flynn Fraser who led them home. Heat 2 was much better with Bailey Smith winning but with a win and a 3rd it was Dorrell who topped the charts heading into the third and final heat. Some more big crashes near the start with damage to a few and a rollover by 64w Samuel Hargraves threw a spanner into an already lengthy meeting. From the re-start 16r Ashton Osborne kept it clean for the race win but it was local hero Dorrell in 212r who finished sixth in the heat to claim the major spoils. Second overall Osborne who was 13 points in arrears of first with the Rotorua clean sweep completed by Fabish who was just a single point behind Osborne in third.

The Shane Warner Engineering Junior Championship got off to a messy start with multiple stoppages and race re-starts made it a long race. Eventually it was 39r Caleb Stanaway who got the win. Heat two was a stop start affair with the win going to 74r Ticayla Manson. Going into the last heat it was 21n Jack Burson who was the points leader and he made sure of the overall win by taking the heat three win and in doing so became the first South Island to get a podium at the event. Second on the podium was 39r Caleb Stanaway with 7w Thomas Davis third.

There was more carnage in the Wholesale Tyres NZ Ltd second tier championship with crashes causing damage and delays. Heat one went to 34r Devon Hunter who ran away from the rest for maximum points. There was no Devon Hunter on the grid for heat 2 with 196r Kate Murray leading the rest home for the win with the heat 3 winner being 45s Corban Swan. Overall it was 94w Ethan Donohue who was consistent all meeting that took first from 454r Jessie Henderson with 4h Coeghan Van Lieshout completing the podium in third.

The Stitch n Print third tier was a little less rough but closely contested with 86b Brad Singer making a last corner pass to win race one then it was 99b Jacob Buckrell who won in a lengthy race two and after more delays in heat three the win went the way of 55b Asha Penn. Overall it was Singer in first just one point ahead of 54p Jayden Williams with another point back to 27p Conor Linklater in third.

The senior consolation races saw win for 79r Eyan Foster in race one which began with a big crash and one driver requiring medical attention after heavy contact. More of the same in race 2 with that win going to 14b Rynan Dittmer from a hard charging Foster. The final heat went to 33r Joel Nicolson-Mabey to wrapup the racing for that group.

The junior consolation races were rough to with more contact and cars connecting with the concrete. The heat one win went to 68s Bronson Pierce then he repeated that in race two and went on to make it a hat trick claiming race three as well.

Congratulations to all the winners on surviving such a drawn out meeting and best wishes to the couple of drivers that needed medical assistance after their on track incidents.

The next meeting at TWS Paradise Valley Speedway is on February 27that 7pm and will feature the Earthmover Tyre Solutions Ltd North Island Production Saloon Champs along with Choice Events & Promotions Bay of Plenty Streetstock Champs with support classes included.