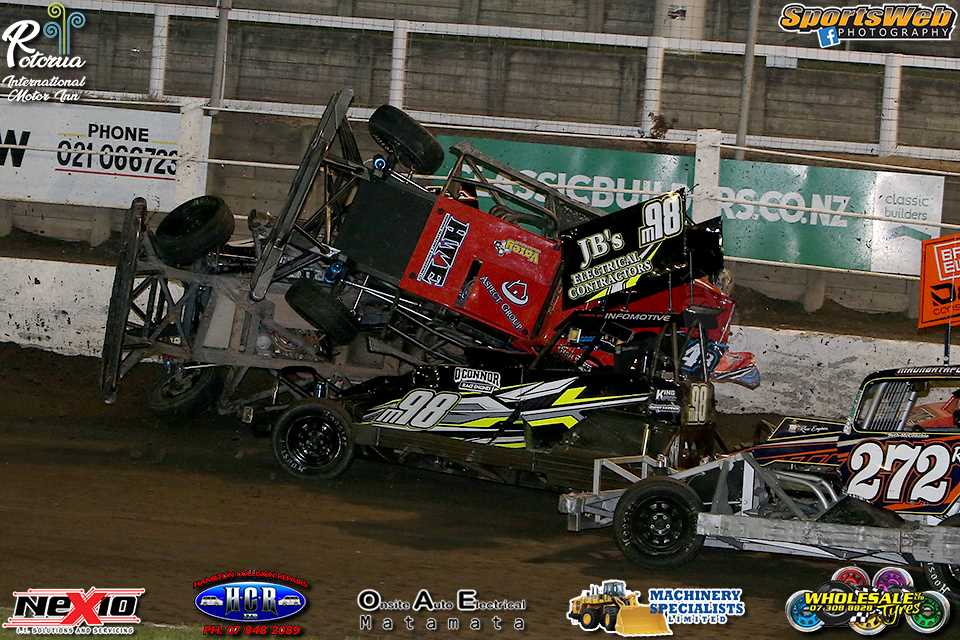 A cool autumn night at TWS Paradise Valley Speedway on March 20th saw the running of the SLIP Ltd Bay of Plenty Superstock champs, the Advance Consulting Services Bay of Plenty Stockcar champs and the Van derMaat Plumbing and Drainage Bay of Plenty Production Saloon champs. The meeting also served as a tribute to drivers that have passed on who contributed so much to the Rotorua Stockcar Club over the years.

The Superstocks were split into two groups with two qualifying heats and the top 13 from each progressing to the 20 lap winner takes all final while reduced entries in the Stockcars saw them with just one group racing over 2 heats with points counting towards grid positions for the final. The Production Saloons were all in with three heats and accumulated points deciding the overall winner

Before racing commenced, the Rotorua Rebels Superstock team did a lap of honour to show off the silverware after they claimed the Palmerston North teams championship for just the second time in the history of the event, the last time being back in 1986 when most of the current team members weren’t even born.

The Stockcars got the championships underway and there was action straight away when 91r Tony Coxhead was flipped over in turn four and at about the same time 691r Brady Devereaux jammed 39r Matt McCready up the wall. The win went to 96r Courtney Young with 544r Dion Henderson the heat two victor. The front row for the final saw Young on pole with defending champion 735r Keegan Orr on his back bumper. An early collision saw 981r Steve Gray towed to the pits after being taken to the wall hard. Henderson and Young went to war, exchanging blows with the latter grinding to a halt after a hefty shunt. Many other battles erupted with just 11 cars finishing and 12r James Thompson getting the win and the Bay of Plenty championship all the way from grid 24. Second was 681r Kirsten Keijzer with 46r Richard Willis coming from well down the field to get third overall. 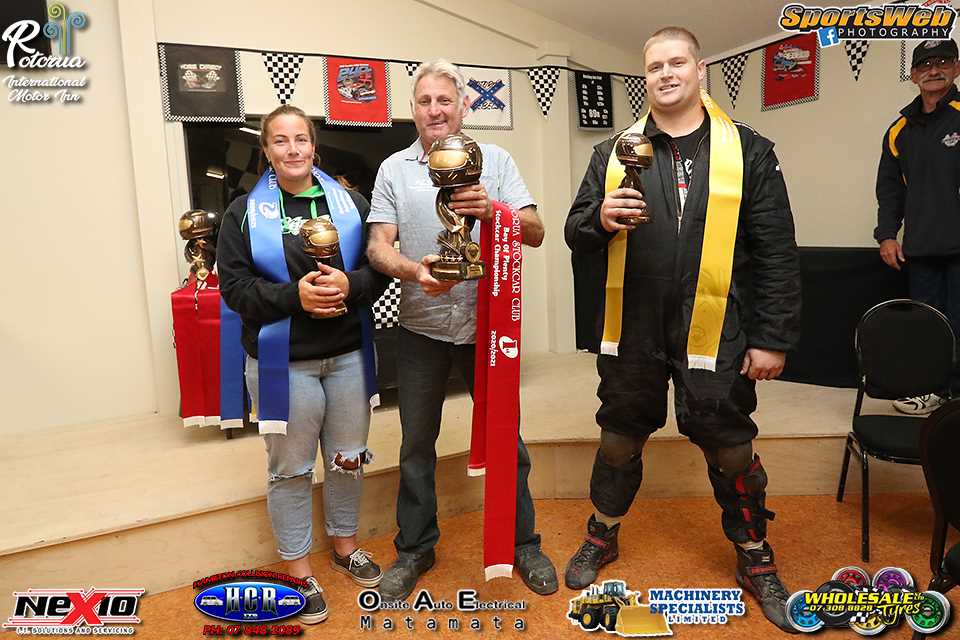 The Production Saloons had a good group for their three heats, a much bigger improvement on the 7 cars that fronted last year. 48h Dave Pilkington took the first up win in a tidy race. Heat two was a tad messy with a bit of panel punching and a few second hand cars by the end where 42h Lance Gribble took a well earned win. The third and final heat was won by 48g Seth McKay but overall it was recently crowned North Island champ 7v Grant Loveridge who claimed the Bay of Plenty title from 14h Wayne Warrender with 48g McKay seeing off Gribble in the run off for third.

The Superstocks set the valley alight for their qualifying heats with 98m Mark Costello absolutely flying in group one to win by a decent distance and his efforts were matched by 66r Steve Hampton who scorched the track to win heat one for group two. Heat two for group one had a spectacular start with a coming together in turn four sending 33a Robbie Mabey over with 94r Dale Stewart finishing up on his side as well and heat one winner Costello also in attendance. The race win went to 106h Des Curry who had the Top Gear car on song. Heat two for group two was a bit more tidy with defending champion 351r Paul Vazey winning off the front row. The final saw Curry on pole but he was promptly spun on the opening lap and was forced to play catch up. A mid race incident had 96r Dylan Towler ride the wall with 81r Damian Orr striking the concrete and both ending up on the infield. More drama soon after as the 33r of Logan Nicholson-Mabey went up in smoke big time but as the laps ticked by it was 335r Ken Hunter who avoided the carnage to claim the Bay of Plenty title from 7r Michael Rumney with 513r Callum Flavell getting up for third overall. 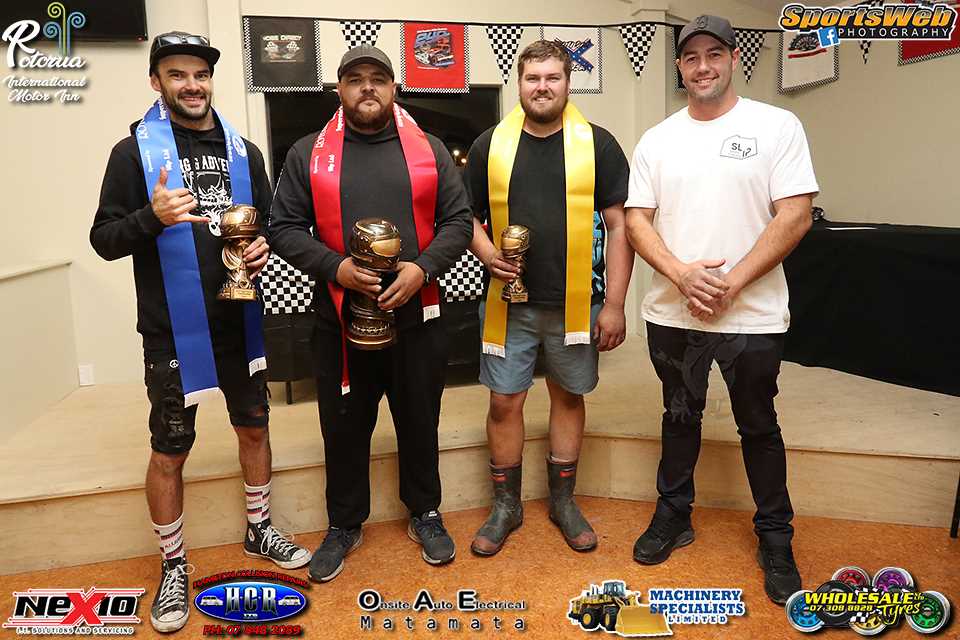 The Youth Ministocks provided the support racing with a bit of carnage along the way and wins going the way of 9r Kierren Flower, 88r Cohen Wright 46r Louis Taylor, 787r Damien Turnbull and 212r Terrence Dorrell, who won twice.

The next meeting at TWS Paradise Valley Speedway is on April 3rd and 4th and it will be the Hickey Contractors Easter Extravaganza featuring the Totalspan Buildings Rotorua Bay of Plenty Saloon Champs, the Grant0s Services Rotorua Ministock Champs, the Lakeland Chainsaws & Mowers Bay of Plenty Modified Champs with support racing from Superstocks, Stockcars, Production Saloons and Streetstocks. Also on the programme is the Bobcat Services Demolition Derby which will bring down the curtain on another successful season at NZ’s number one speedway track.

Meeting Photos will be available on www.sportsweb.co.nz