IT'S GOOD TO BE BACK! ROTORUA SEASON STARTS WITH A BANG 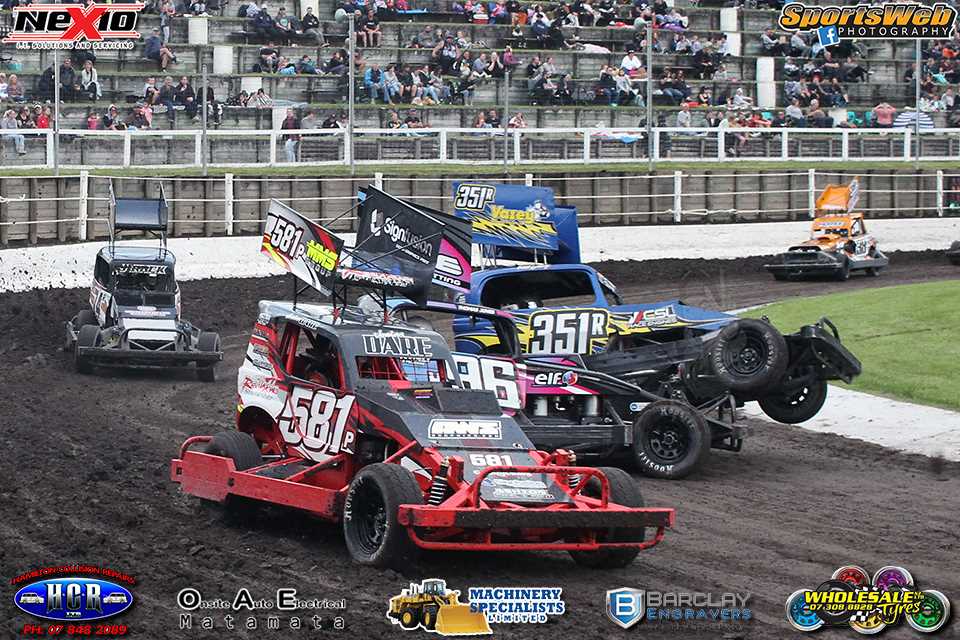 After seemingly endless days of wet weather, the season at TWS Paradise Valley Speedway got underway on Friday night under relatively clear skies. The rain stopped in the morning and the track preparation crew worked tirelessly and did wonders to get a raceable surface by the 6.30pm start time. It had been 238 days since the last meeting and it sure was good to break the drought. Five classes were there along with the annual fireworks display, sponsoerd by ProParts Rotorua.It was the usual stunning display put on as thousands of dollars worth of pyrotechnics were launched into lower orbit midway through the meeting to the awe of the many patrons who flocked the valley for a look.

The two groups of Ministocks (junior and senior) got the ball rolling with lots of drivers back and a few rookies in the mix too. The youth drivers did well to deal with the tacky track early on with wins going to 95R Mitch Fabish, 971R George Crawford, 9R Kierren Flower and 212R Terrence Dorrell. Also placing well were 42R Tasman Bryson, 88R Cohen Wright, 93R Flynn Fraser and 21R Jack Wilson. Later races went the way of Flower and Fabish again who both had great nights to start the season.

A great Stockcar of 36 field fronted for their first four races since March and they slowly got into the bumper work and the night went on with causalties appearing on the infield more and more. Two rollovers kept the big crowd happy with 58R Robbie Sisson and 681R Kirsten Keijzer both going wheels up in front of the tower in seperate incidents. The race winners were 735R Keegan Orr, 638R Robbie Morris 6R Rikki Malcolm with 23R Kyle Ashton the first to take the flag in the class for the new season. 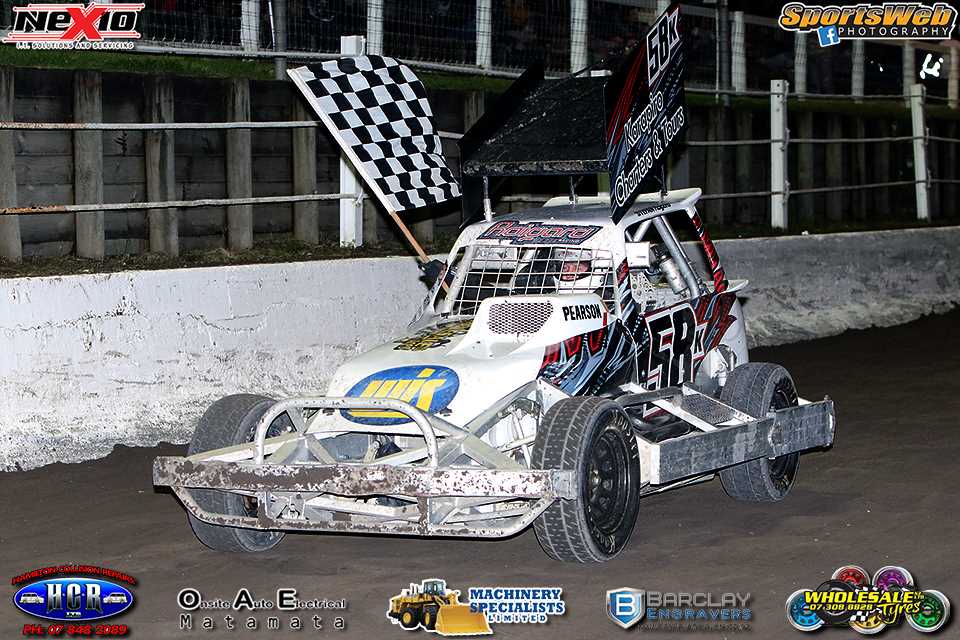 An impressive 44 Superstocks were on hand in preperation for their big season on the track with major meetings looming in January for the glamour class in speedway. They run four races to find the best 26 for a one off feature and the rest heading to the consolation. 581P Jordan Dare was on from the start winning both his opening races but sufferred a puncture while leading the feature and was forced to call it a night. Other heat wins went to 26K Mitch Vickery and 106R Des Curry while last season's Bay Of Plenty champion 351R Paul Vazey showed everyone what the underside of his Superstock looks like when he rolled in his second race after tangling with 85M Dan Pollock. The feature win went to 58K Stefan Roigard who benefitted a little from many of the top placed drivers getting flat tyres but drove a clinical race too to get the flag, 99M Todd Hemmingway made up for a not so good run early on to collect the win in the consolation race.

The Streetstocks could manage just seven starters with a couple of Auckland drivers and one from Kihikihi making the journey down for a skid with locals The out of towners didn't get a look in though with the A cars of 75A Todd Neil and 16A Paul Payne kept down the field while 12K Daniel Curran broke his front end in race two. That left current national champion Mike King to take a win the the 1NZR car then it was last season's Grand Prix winner 858R Shane Bracken who took the next two races and the field dwindled away. 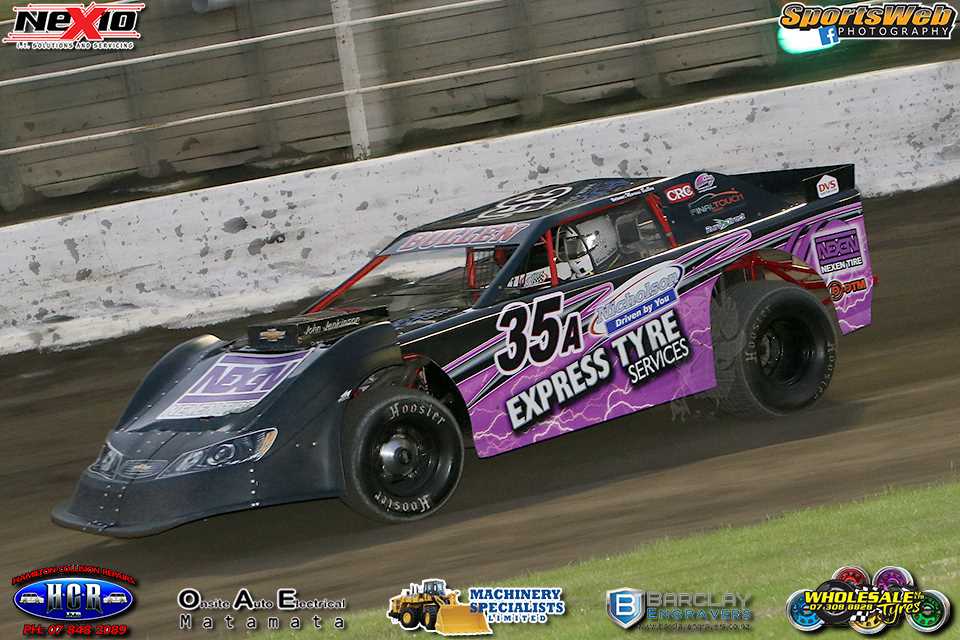 The final event on the programme was round one of the DVS Super Saloon Series with a good field of thirteen travelling to get the series underway. Two heats then a feature was the format with close racing in all outings. Kihikihi stalward Rossco Cresswell in 77K won first up then Aucklander 99A Shane McInteer got the race 2 win by his name. The top 6 points scorers were then inverted with the highest qualifier off grid 6 for the feature. A few early exits paved the way for 35A Marcus Bullen to get to the front but had to hold off the hard charging 21A Steve Williams and 62A Kelvin Garnett to take a well earned feature win.

The next meeting at TWS Paradise Valley Speedway in on Friday November 13th which will the the first of four club meetings featuring all classes as well as a Stockcar teams race between the Rotorua and Baypark, action getting underway at 7.30pm that night. 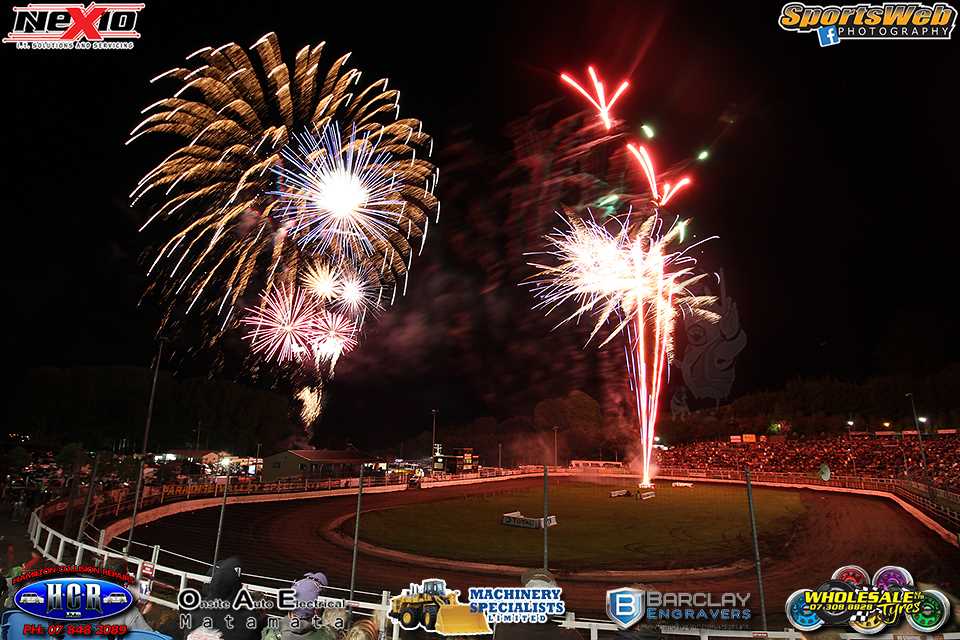