Club night number one of the season took place at TWS Paradise Valley Speedway on Friday November 13th with six classes on show and some good racing from all. Big fields of Ministocks, Stockcars and Superstocks were pleasing to see along with a bigger than normal crowd size for what is traditionally a low key meeting.

As per usual the two divisions of Ministocks got the evening underway with the juniors and seniors getting a couple of races early then another towards the end of the night. Orange group winners were 88R Cohen Wright and 212R Terence Dorrell who won twice and was a close second to Wright in the first race. Other good placegetters were 93R Flynn Fraser, 48R Tasman Bryson, 118R Joel Steiner and 454R Jessie Henderson. In the yellow group it was 971R George Crawford who took the first win with 811R Luke Steiner next to get his hands on the flag with 11R Jack Cunningham Moffatt winning the later race. The best of the rest were 46R Louis Taylor, 99R Mikayla Dick and 232R Kaleb Heaven. 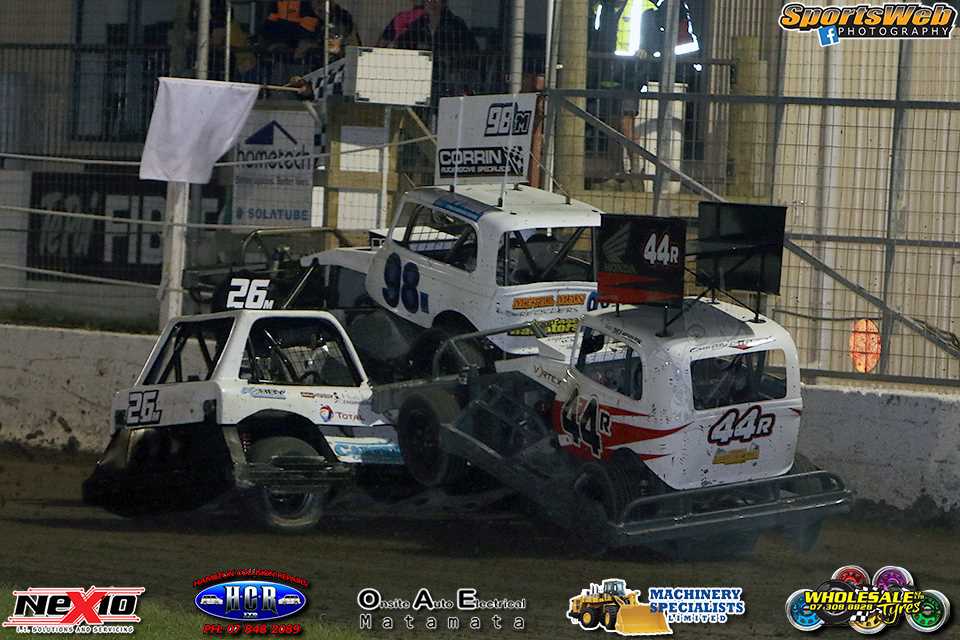 The bulging Stockcar field had mixed fortunes with a lot of cars finishing up on the grass despite the racing not being as rough as it is some nights. They had four races with as many different winners. 733R Riley McDonald, 735R Keegan Orr, 73R Andre Rumney and 19R Sam Pearson all took a win each while 45R Sean Wepa, 91R Tony Coxhead, 52R Mike Herbert and 189R Milla Theobald all impressed with top placings. Another feature in the Stockcars was the one off teams race between the Rotorua Rugrats and the visiting Baypark Bulldogs. The four on four clash started well for the local squad with 144R Steven Pattle getting the lead from the green light but was chased down and pounded into the turn four concrete by 26M Bryce Carter which ended Pattle's race along with 33R Chris Wright who suffered a similar fate just behind him. That made it four vs two which effectively saw the race gone for the Rugrats. 188R Tony Gallagher bravely battled on aagainst the odds with limited success. He got a good shot on leader Carter as he headed to the finish but the 26M tank bounced off the wall to take win for the Bulldogs.

The Superstocks were out in full force once again with the field split up over four fast but not so furious races. Local driver 81R Damian Orr had a good night with 2 wins and his efforts were matched by 28V Elias Dykstra and 19M Kerry Remanant, who was never out of the top four all night. A couple of the races were marred by frequent stoppages for cars spun up or facing the wrong was with some others failing to move when the green lights were reactivated. Not so fortunate were 71P Shane Mellsop who was shown the wall in race three and caught fire briefly. 9R Brent Stewart was leading that race too before being pushed wide and cleaned up by the Baypark duo of 98M Mark Costello and 38M Ross Ashby while 118R Bryce Steiner was haunted by electrical issues which kept his laps to a minimum.

Only three Streetstocks made the starting grid with 1NZR Mike King and 2NZR Chris Shingleton doing the winning. Production Saloons made their first appearance since March with the first two races going the way of 27R James Cunningham and 5R Trent Robertson respectively The third and final race looked to be heading to 12R Anthony Madgwick who went well until losing control, getting the car on 2 wheels for a spell before landing only to plunge into the wall hard causing major front end damage. 42H Lance Gribble benefitted from that incident as he took the win, his first of the season. The Six Shooters had their first squirt on the dirt in a while with ironically a field of six cars. Regular winner at Rotorua 51M Cole Wood added two more to his tally as he swept the first two races but was held back in third for the last one as 87A Paul Smith got a win next to his name.

The next meeting at TWS Paradise Valley Speedway is on November 28th and is the first of three big Superstock features for the season. The Rite Price Collision Repair 50th Anniversary Superstock Triples will take top billing starring 18 teams of three from all over the country who will battle it out and see who comes out on top. Support racing will be provided by Stockcars, Ministocks, Production Saloons and Vintage Stockcars.