TWENTY FIVE IN, ONE TO GO! 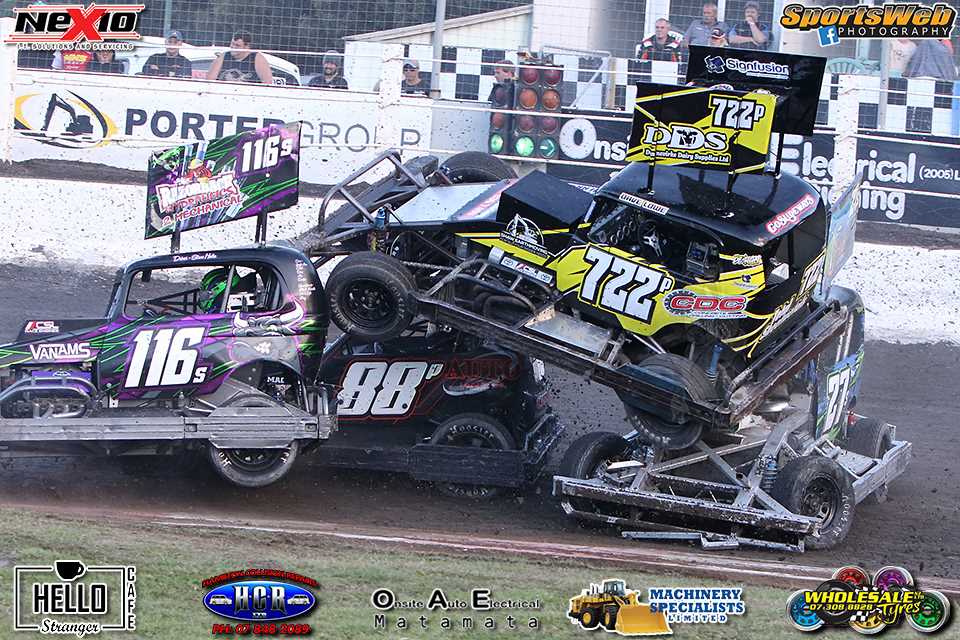 The finals field for the 2021 TWS World Invitation Superstock Champs at Paradise Valley Speedwayis almost sorted. Qualifying night took place under sunny skies on Friday with 115 cars fighting it out for 20 qualifying spots. The cars were divided into 4 groups with the top five from each progressing to the big dance and a shot at the title. The 26thspot in the finals will go to the winner of the repercharge which will commence proceedings tomorrow night. Unfortunately due to Covid travel restrictions the UK contingent were forced to stay put so the invitation part of the event came from within,as last season's major championship winners all pre qualified for the main event. 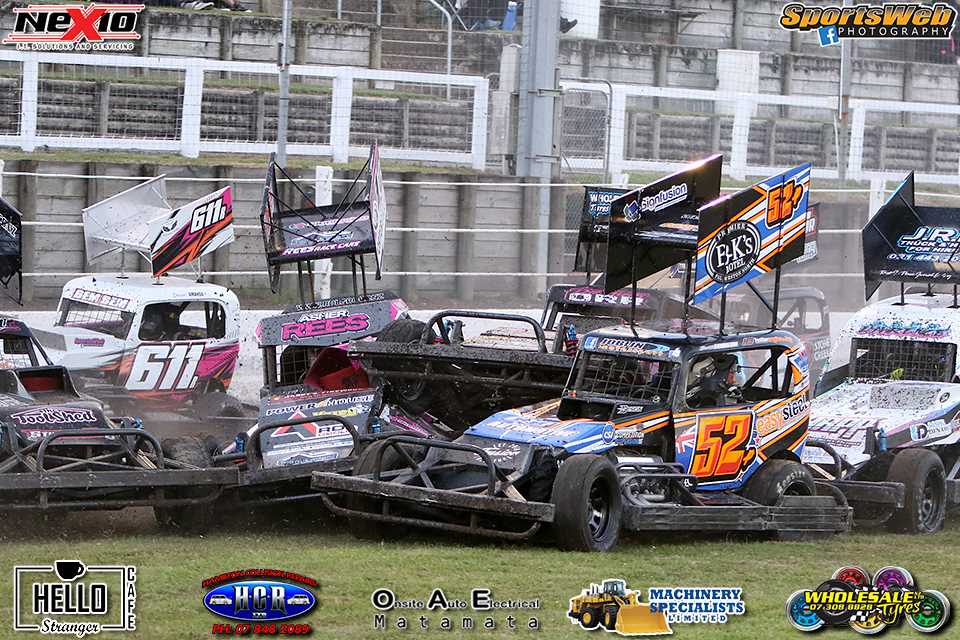 sher Rees. The champ was spun early then copped a puncture as 581p Jordan Dare took the first win of the meeting. Heat 2 saw 75s Carl Shearer hung on the wall during lap one but managed to get down. A melee on the infield saw 22b ZachLawrence, 81r Damian Orr and 1nz Rees locked together with only Orr managing to get away and rejoin the race. 4p Chad Ace recovered from a rough heat one to take the win. Heat 3, turn 1 had 25m Scott McEwen up and over after tangling with 84n Anthony McKenzie. The win went to former ministock driver 12p Seth Hodge who had the tank flying. 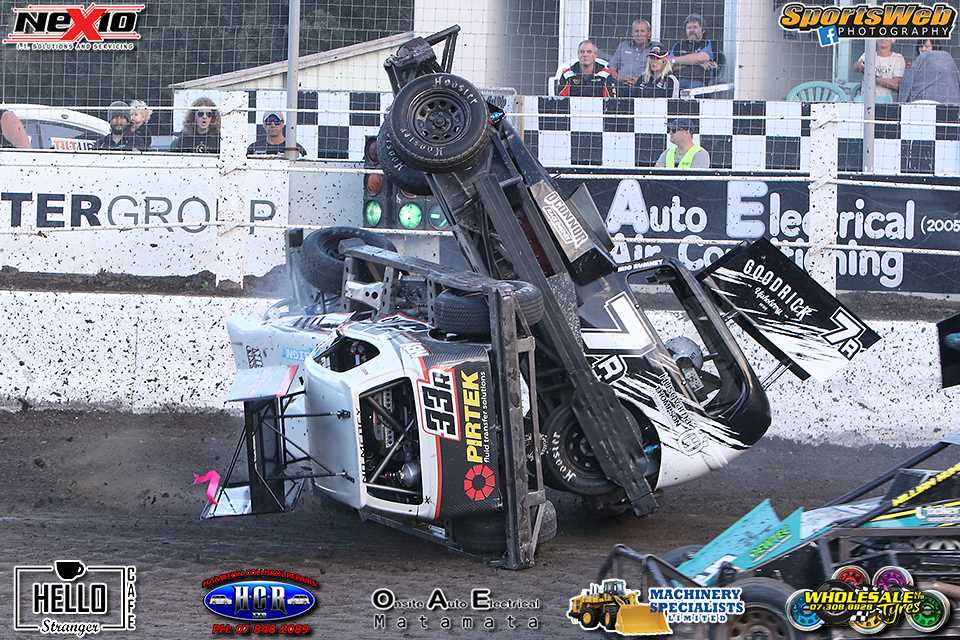 722p David Lowe drove over the front of 27s Phillip Gargan and into the side of 88p Jack Miers ending up on his side in turn four. Moments after the restart 33r Logan Nicolson-Mabey turned turtle in almost the same spot with some help from 7r Michael Rumney. Eventually 13m David Elsworth took the win as cars littered the infield.Heat 2 was a lot less dramatic with94p William Humphries winning from 88p Jack Miers. Heat 3 had a few cars missing from the grid. The race ran smoothly until near end when Humphries was squeezed wide on the home stretch and went head first into the pit gate fence in a shower of sparks. 5g Josh Prentice took the race win. 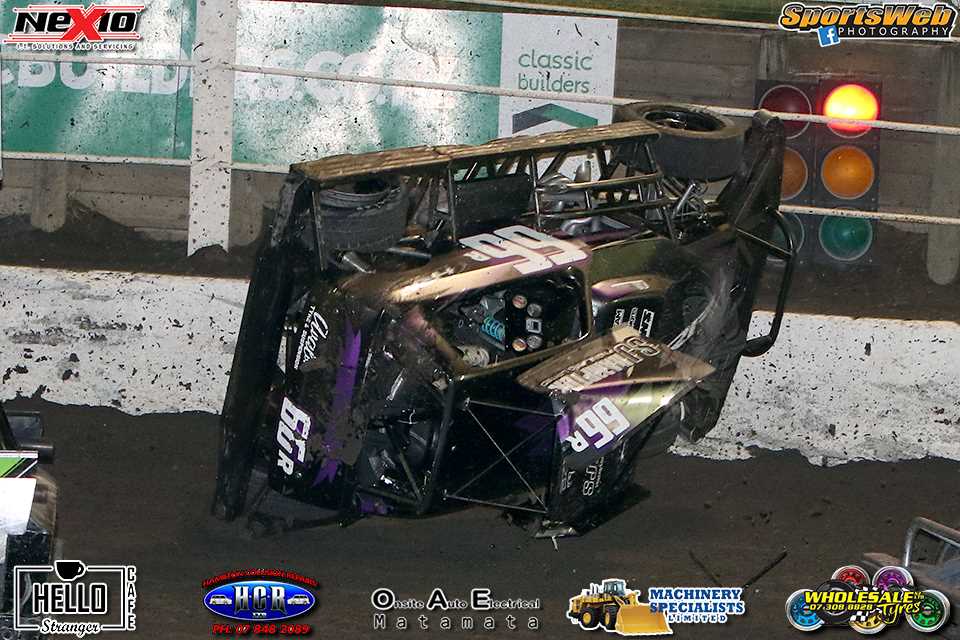 with broken suspension and flat tyres the story of the race. Staying out of trouble was three time winner of the event 72p Simon Joblin who took the flag. Heat 2 had a few incidents the most notable was when 57v Dylan Marshall was driven into the wall then was hit by 66r Steve Hampton who rolled over by was cleared to continue after landing on his wheels. 591p too the win from 127g Ethan Rees. In heat 3 there was a big smash on lap one with 638r Robbie Morris riding the wall big time. 94r Dale Stewart took the heat win after passing 89w Dale Robertson on the final lap. 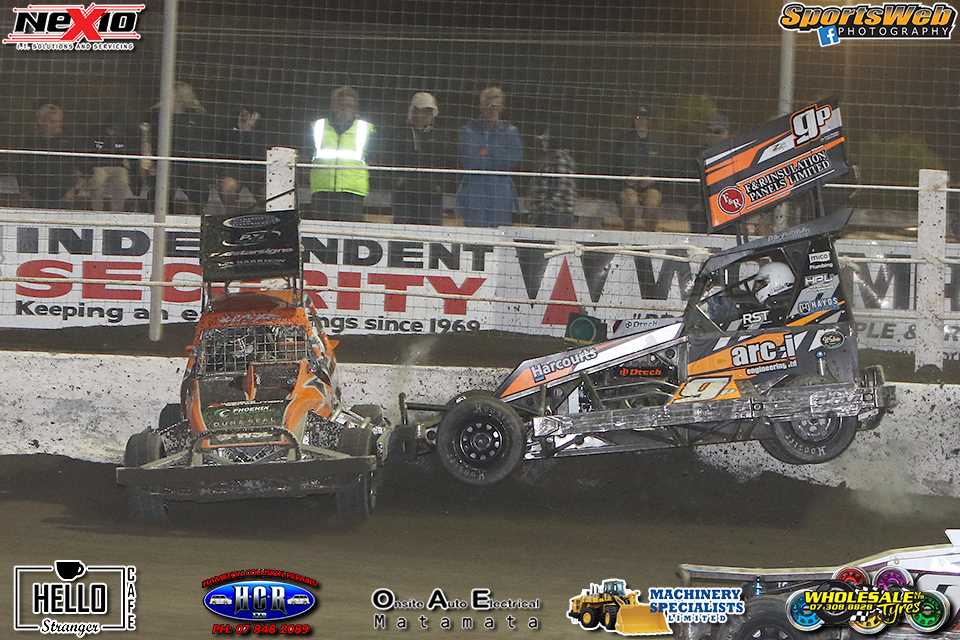 way buried in the wall on lap one. There was a good battle out front with 10g Peter Rees and 2nz Jason Long swapping positions a few times with Rees slipping by one last time as they approached the finish line. Heat 2 was won by 58p Peter Bengston with Jason Long and Peter Rees again among the top three finishers. Heat 3 saw some sorting out of who's who with 9p Brett Hyslop having a poke at 85k Jared Wade but he was then tapped by 15p Luke Miers which sent the Hyslop car up and over. 46b Quinn Ryan took the race win.

Also on the programme was the 4th annual Sharky's Engineerin 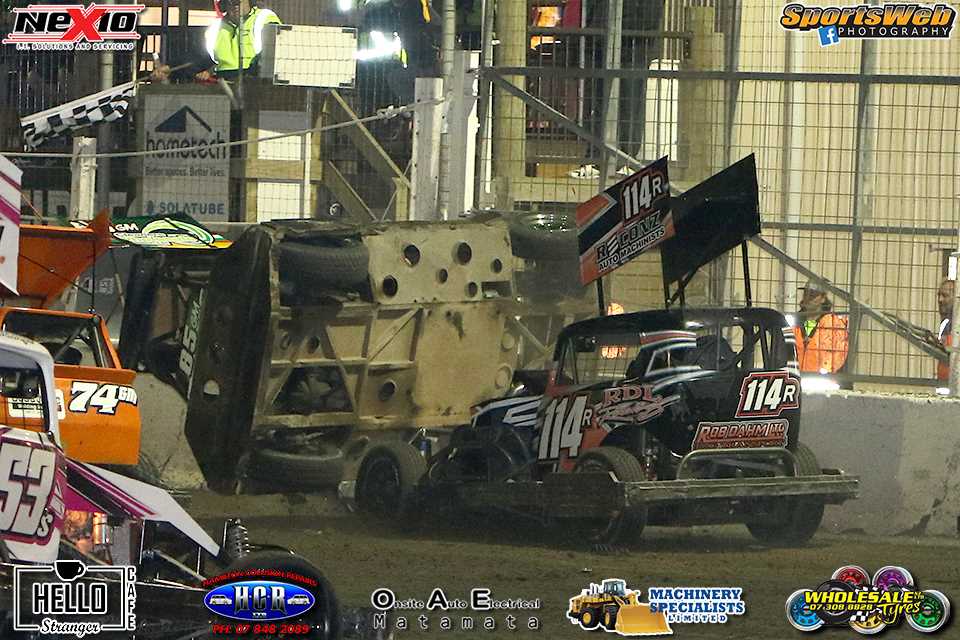 g's Aotearoa Ladies Stockcar Crown with 26 ladies battling it out over 3 heats with a further 3 to decide the winner tomorrow night. A relatively smooth heat one went the way of 18v Hailey James from last year's third place 85gm Brittany Carpenter. Heat 2 had some bumpers being used and none more so than when Brittany Carpenter was tipped over a few meters short of the finish line while trying to avoid a stalled car. The win went todefending champion 69s Carol Podjursky. Heat 3 saw more attacking from the girls and another race win to Podjursky which put her top on points going into night two.

In addition to the programme was the Sportsweb Photography Ministock Invitation 20 of the best local drivers putting on a show. 16r Ashton Osborne took the first heat from pole position. Race 2 was very close with 88r Cohen Wright winning by the slimm 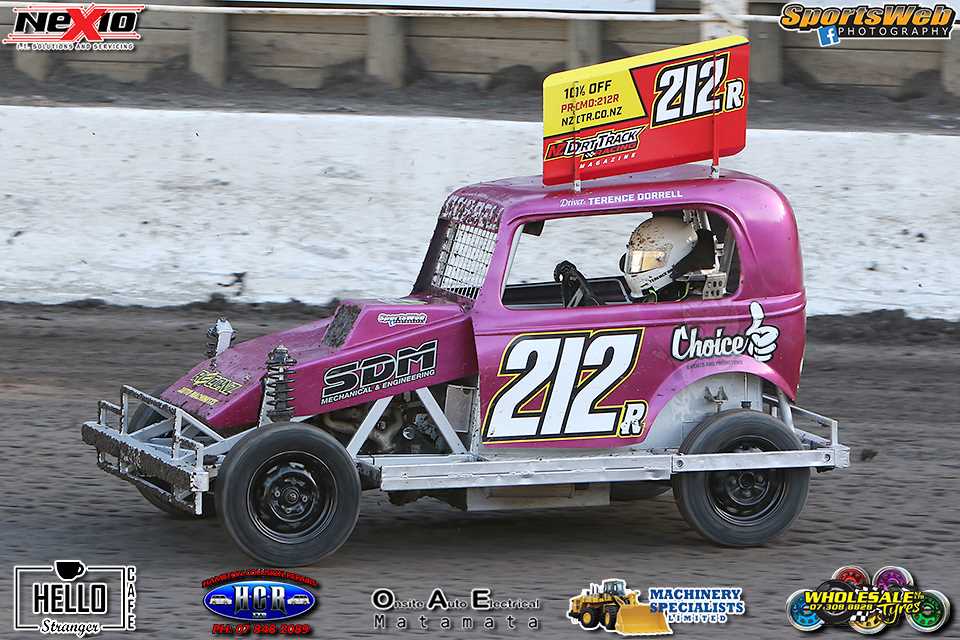 est of margins from 212r Terence Dorrell. The third and final race went to 118r Joel Steiner but it was Dorrell who took the overall win from Osborne and Wright third.

The finals night will get underway from 6.30pm tomorrow with the repercharge then onto the three heats finals for the championship. Also on the programme will be the Superstocks in Paradise for the next 26 and the tier three championship for the rest. There will be the last three heats for the Aotearoa Ladies Stockcar Crown and if that's not enough the Palmerston North Pumas will be in town for two Stockcar teams races against the local Rotorua Rascals, so get along to TWS Paradise Valley Speedway tomorrow night to catch all the action!