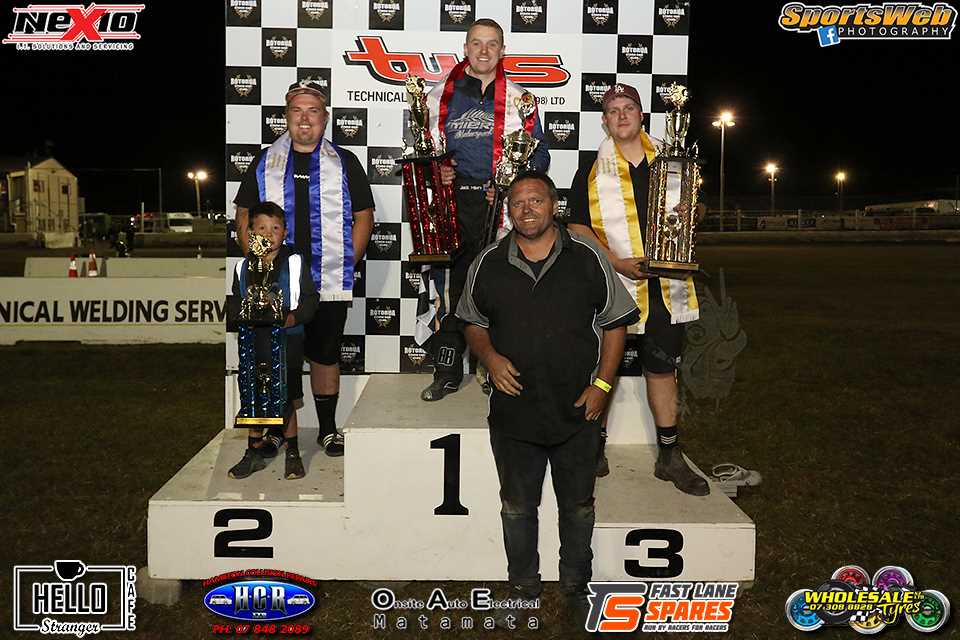 The TWS World 240's qualifying night on Friday was awesome and while the finals weren't quite as action packed as some might have expected, it was still a great meeting. A rare Saturday night of action for the current season took place at Paradise Valley Speedway and in the process a new champion was crowned. 88p Jack Miersput together 3 clinical drives to secure his first major championship victory scoring 72 out of a possible 78 points in the finals heats. Throw in a couple ofStockcar teams races and the last three heats for the Sharky's Engineering Aotearoa Ladies Stockcar Crown and it made for another memorable night. First up though it was the repercharge to complete the finals field and with only the winner progressing to the main event.

On pole for the crunch race was 5g Josh Prentice alongside 46w Ethan Levien. Prentice grabbed the lead early with 94r Dale Stewart hot on his tail.The reds were on early to remove 38r Ross Ashby and 351r Paul Vazey after a big collision but from then on the race run it's course with Prentice leading them home and the last place in the final.

The 26 finalists all did their parade lap before forming upin front of the packed terraces for driver chats and last minute preparations. It wasn't quite the same with Frankie WainmanJnr and his UK friends joining the field but rest assured they were definitely there in spirit and no doubt watching the live stream via The Pits Media who always do a sensational job. Then came the all important and amended call of "lady and gentlemen, start your engines" as they all fired up in unison before driving around to the starting grid for the first heat.

On pole was 591p Wayne Hemi alongside 15p Luke Miers. After a frantic first few laps the reds came when 144g Tim Ross was tipped onto his side after getting crossed up in front of 58k Stefan Roigard and 66b Randal Tarrant. Unfortunately for 94p William Humphries he failed to complete a lap while 46b Quinn Ryan and 34p Rebecca Barr retired with damage. Hemistayed out front to collect maximum points from 971c Jayden Ward and 10g Peter Rees. Heat 2 had all but 2 cars back out, only Quinn Ryan and William Humphries missing from the grid. 72p Simon Joblin had pole and led them into the first turn as heat 1 winner Hemi was spun early. 66b Randal Tarrant had it in for the Joblin brothers ferociously attacking both 52p Scott and 72p Simon with the latter retiring infield on three wheels after leading all race. 88p Jack Miers took the win and the points lead with 47 heading into heat 3. The next best were Peter Rees on 45 then back to 15p Luke Miers with 43 with defending champion 5w Keegan Levienand Hemi making up the top five on 42 and 40 respectively. So to the third and final heat and it was 52p Scott Joblin on pole and after a first lap melee the race was foot to the floor racing with not the traditional crashes and take outs that typify the deciding races. 75s Carl Shearer took the win but the points leader Miers was left alone and finished in second place and nab the championship by a massive 11 points from 5g Josh Prentice and then it was back to a 3 way tie for third with Hemi, Ward and Long all tied on 59 points each with Ward seeing off the 2 ex NZ champions in the run off to secure third overall.

The tier 2 Superstocks in Paradise races had a lot riding onto it with the overall winner automatically qualifying for the 2022 event. Heat 1 was fast and over in minutes with 46w Ethan Levienthe victor. Heat 2 went by just as fast with 96m Dylan Towler coming home first. Heat 3 went to 9b Adam Groome but overall Levien in 46w earned his ticket to next year's finals with a tie between 28v Elias Dykstra and 81r Damian Orr was sorted via a run off with Orr winning that and second overall leaving Dykstra in third.

The Ladies went into battle once again for another three times to find a champion. Heat 4 went smoothly most the way with 33b Kareena Annan getting the win while 69s Carol Podjursky kept the points lead with a well driven 7th place. Heat 5 and it was no surprise to see Podjursky attacked early in the race but recovered to to finish 14th as 172p Rebecca Barr took the win and the points lead with a heat to run. The six and final heat saw hits in all directions and notably Barr was spun a couple of times while Annan was having a crack at anyone. Barr retaliated by driving the 31s tank of Chloe Ingram hard into wall. 121gm Shinnae McNally took the race win but overall it was Barr who had done enough to secure her second Ladies Crown by 2 points from Podjursky with McNally a further 2 points adrift andcompleting the podium in third.

Round one of the Sportsweb Photography Stockcar teams battle saw the Palmerston North Pumas take on and defeat the local Rotorua Rascals in a damaging encounter that saw the visitors take a great win. The rematch saw the Rascals make amends taking the win in another brutal battle.

The next meeting at TWS Paradise Valley Speedway will be on Friday January 29th which will be the final club night of the season featuring Production Saloons, Six Shooters, Vintage Stockcars and Ministocks with racing underway from 7.30pm.

Fastest Laps For All Classes