FINAL CLUB NIGHT OF THE SEASON A GOODIE 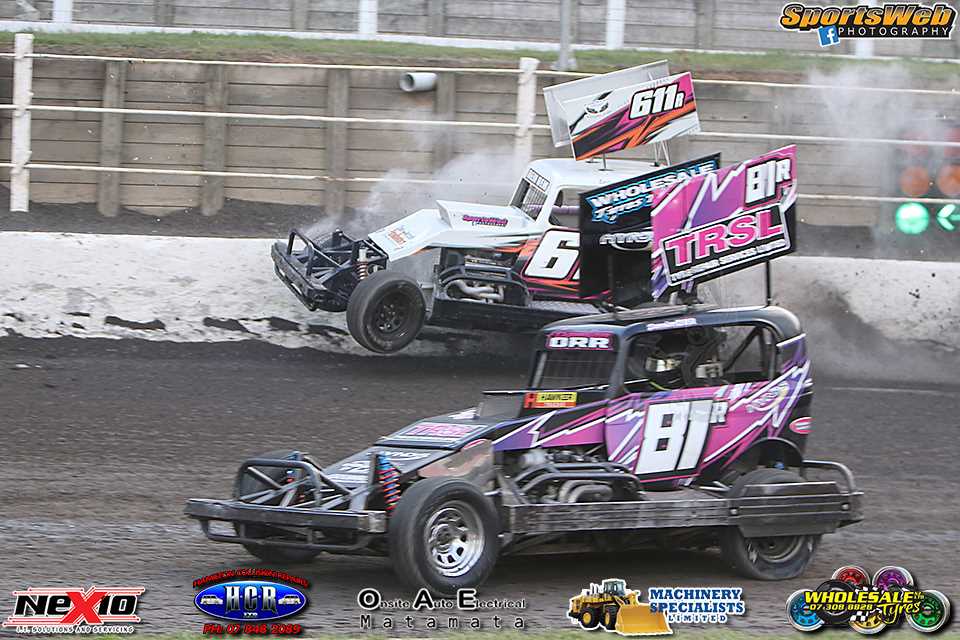 The fourth and final club meeting at TWS Paradise Valley Speedway for the season took place on January 29th featuring all Rotorua registered classes as well as the Vintage Stockcars and a shakedown run for the Rotorua Rebels Superstock team who will be representing the club next weekend at the Palmerston North Teams Champs.

As usual the Ministocks commenced the meeting with orange group and not surprising it was 212r Terence Dorrell grabbing the win first up. Dorrell also took out race two from well back on the grip and had a good battle with 34r Devon Hunter before breaking away. Race three saw 93r Flynn Fraser get the win and deny Dorrell a perfect night although 2 wins and a second place is not to be sneezed at.

The yellow group for the lesser experienced drivers saw wins for 335r Carson Rolfe in the first race. The next one saw 94r Pippa Berg cop a big shunt after half spinning as 9r Kierren Flower took the race win with 46r Louis Taylor collating the final flag in the class for the night.

A good 16 car field of Stockcars came out for play on the dirt and the first race went to 18r Jayden Steiner from the front row but a relegation saw 733r Riley McDonald promoted. The next race saw McDonald win outright while a few others used their bumpers behind him. The final race saw McDonald denied a hat trick by 144r Steven Pattle as 68r Keith Spanhake grabbed a win to end his night.

Just the 8 Production Saloons made the grid for three races and club points on the line. 5r Trent Robertson added some more to his tally winning race one. 27r James Cunningham took the second race with Robertson shadowing him home. Race three saw some carnage for 69r Shelly Jenkins and 63r Peter Craddock in separate incidents as Robertson collected another win to signal a great night for the 5r driver.

As well as the Rebels hot laps there were 16 other Superstocks present. They had three fairly fast races with 118r Bryce Steiner holding off the quick 81r of Damian Orr for the race one win. Next in the winning circle was 335r Ken Hunter and a lot more fast racing behind him. More foot to the floor action saw 51r Sam Guise take his first win in the class.

A handful of Streetstocks fronted for their three races and not a lot of contact as a result. 858r Shane Bracken took out race one then it was former 1nz Mike King who put some distance between himself and the rest winning the next two races with ease.

Six Shooters were also racing for club points and heat one went the way of 17r Luke Westbury with 17a Ian Blackman taking race two with Westbury close behind. The last run for the open wheelers was won by 79m Billy Griffiths with Westbury again the runner up.

The Vintage Stockcars had a field of eight put on a good show in their three outings. Grant Savage driving 78h won the first race then it was 15h Geoff Mconie home first in race 2  and in the last one it was the 3r car of Ken Sines winning after a second and third in earlier races.

The next meetings at TWS Paradise Valley Speedway will be on February 12th and 13th from 6pm each night and will feature the annual New Zealand Dirt Track Racing Magazine Ministocks In Paradise with over 100 of the young racers in town for 2 days of racing and competition.